Valentine’s Day comes only once a year, so just how much are you willing to spend?

According to the National Retail Federation, consumers are expected to spend on average $144 this Valentine’s Day. When it comes to showering our loved ones with jewelry, romantic dinners, and roses, Americans clearly spare no expense.

However, spending over one hundred dollars for a night out on the town may not fit in to the budget of a college student. Not to worry, because there are plenty of alternative ways to show your affection without breaking the bank.

“Actually, we [Dunkin’ Donuts] get tons of students. I think most of the area and most of the people that actually do come in are mostly students,” Kristin Taber, assistant manager at Dunkin’ Donuts said.

A QU couple recently celebrated their one-year anniversary in December. Scott Prsha, senior, and Marissa Gonzalez, junior, said they may consider changing their Valentine’s Day plans after learning of the local student discounts.

“I don’t think there is a limit as too how much you can spend on Valentine’s Day. I mean, we do not usually go over the top with anything because we are college students, and we don’t have a lot of money to begin with to be spending on extravagant things,” Gonzalez said.

Along with Quincy University, other colleges and trade schools with students on a budget in the local area include John Wood Community College, Gem City College and Blessing-Rieman College of Nursing & Health Sciences.

With proof of a valid student ID, anyone enrolled in college can take advantage of the local discounts all year-round.

The QU couple also mentioned the rarity of a date night between their busy schedules so Valentine’s Day is something to celebrate.

“I definitely think it’s the time you spend together that really means the most when it really comes down to it. You cannot really put a price tag on it because it’s the memories that you make rather than the price of the clothes or the gifts,” Prsha said.

Besides local business discounts, college students can browse through the Dealhack Student Discount Guide; a compiled list of stores featuring hundreds of discounted items just for students. The survey is conducted on a quarterly basis and updated every three months.

In total, Americans are projected to spend a jaw-dropping $19.6 billion this year, a close second to the survey’s record-breaking amount in 2016. 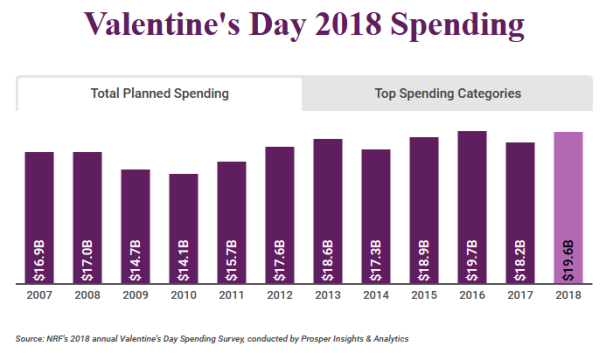 Typically, college students live on a ramen noodle budget. QU sophomore Cameron King believes splurging once or twice a year on his long-distance girlfriend is worth it.

“I’ve been with this girl for like two years so you always want to do something bigger and better every year. I just kind of have to wait it out, go with the flow, and use what ever money I have to piece something together and I’m sure she’ll love it,” King said.

Save money this holiday season and give back to your Quincy community by utilizing local student discounts.