After scrolling through my Facebook timeline, keeping the “perfect post” concept in mind, I discovered something quite revealing. By comparing the people in my friends list to the companies, businesses, or celebrities I follow who all use this platform in one way or another- trying to sell something, force their opinions and ideas on everyone, or endorse something/someone; I found that my mutual Facebook friends received much more positive reactions, not just the most, but the best. For example, a mutual friend of mine recently purchased a new vehicle. By simply posting a picture and captioning it with cute little car and heart eyed emojis, she had tons of likes and comments congratulating her. Being she is actually a car saleswoman, she did not try to publicize her company or even say where she bought her new car, and I think this is why she received so much love on her post. People are happy for her and do not feel an obligation to any specific car dealership. Comparing this post to her previous ones where she made a sale at work, posted a picture with a caption, I noticed that does not receive as much feedback because people typically do not really care about the success of another stranger. Although, is that not what Facebook is essentially all about? The sharing of your successes, sometimes your failures, or even what you had for lunch for all your friends to see is my definition of Facebook.

My most recent successful post to Facebook was about a month ago when I changed my profile picture to a picture of my friend/colleague and me at our Christmas party for work. It received around seventy-five likes and five comments. By tagging my friend in the picture, this allowed for all her friends and family to see and react as well, which in turn boosted the likes and other reactions of my post. Also, I think people just enjoy seeing updated versions of you (and in this case my friend too). 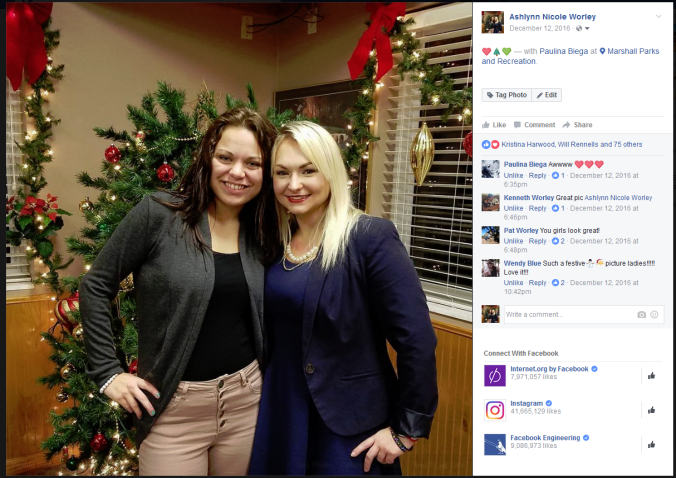 AEIOU (and sometimes Y) stands for something so much more than you might think. A-action. E- engage. I- inspire. O- outrage. U- understand. Y- why? This strategy works well when you are aiming to create that “perfect post” on Facebook. Imagine you are working as the social media director of a company and they ask you to promote the business online. You log onto the company’s page and in your mind, go through each letter and check it off once you are sure it is covered in the post. People want to read something on Facebook and feel like they can make a little bit of a difference somehow, someway. If you make a post for a company that is bland, dull and boring, it will be scrolled right past. By using the AEIOU strategy, you are sure to create that perfect post almost every time, receiving the reactions and responses you and especially your employer seek! Not to mention a possible raise as a reward for your fabulous promotion skills!

Facebook is one of the most recognized social media sites worldwide. But, when it comes to the question of whether or not they should begin branding themselves as a legit news producer, they already are in sense. There are pros and cons to something like this of course. But if you stop and think about all the ads and promotions you scroll through on your daily news feed, Facebook always has things popping up across your timeline related to the sites and pages you ‘like.’ In a way, this can be creepy. The internet recognizes things you do, then repeats and remembers them. The only change I see happening if Facebook did decide to officially brand themselves would be the companies, businesses, and websites featured on Facebook would expect to receive some sort of revenue and the creators and operators of Facebook would most likely be liable for any ‘false news’ that came across their site.

Whether you think the contents of a post are deemed inappropriate, pornography, violent or threatening, it goes against your views, or you simply do not want to see it for some reason, Facebook allows its users to report the post and then they review it further. Recently, Facebook has added another option when you are reporting something- false or fake news. What happens when people report false news is this: Facebook marks on the post that it has been reported as fraudulent or misleading information, however they do not delete the post entirely. This is a progressive step in the right direction for Facebook. People ultimately determine for themselves what they believe is false news or not. Facebook is there to make sure everyone is aware of what the content of a particular post could potentially be and that is as far as they should go. Leave the false news outrage for President Trump to figure out.

According to recent studies and polls, it has been shown that videos are commonly the most ‘shared’ posts versus just a link or photo. When Facebook upped the ante and added live streaming to the mix, it changed the game. At first, live video was only an option for celebs and public figures; this makes the average Dick and Jane feel not only virtually connected but as if they are really there when they watch, live, someone they admire (or maybe hate). However, now that “normal” people are allowed to stream live on Facebook, it does not seem as meaningful to me. Live video is just another way to stay on top of the game and literally see what someone is doing at that same second, react and watch the comments flood in, share it, and days later you can view it again. When do we say enough is enough? Facebook will be ever evolving and anything is possible these days…. well, almost anything.